SUMMARY OF RESULTS FOR THE 2009

Click here to view the photos of the 2009 White Mountain Double Century.

A Weapon of Mass Destruction by William Hunt

The inaugural event of the White Mountain Double Century proved to be highly difficult. As the results and rider feedback rolled in, the crew back at the NdZONE camp heard the White Mountain Double was a beast, destined to be legendary, a truly horrifying, beautiful, gut-wrenching ride from HELL, WMD was a Weapon of Mass Destruction, and the organization and support was flawless. It was nice hear the passion some riders had for the event. It was just our desire to create and produce a positively unique event for the California Triple Crown.

The White Mountain riders climbed in the morning until reached the clouds, and in the afternoon crawled through the heat. From the altitude to the heat, NdZONE’s crew supported all the riders get through a tough course. 92 riders registered for the challenge, 83 of them made it to the start line, and an impressive 66 riders crossed the first White Mountain Double Century’s finish-line. These riders saw temperatures of 45º in the morning to 109º in the afternoon.  80% of the all starting riders finished the ride. A BIG Congratulations to all the riders!!! A congratulations goes out to Elmar Stefke, and William Pease for being the first riders to finish. Congratulations to Tony Rios and William Pease as this was their first double century, and to Mike Melville for being first ever to finish the White Mountain Double on a fixed gear bicycle. The riders who completed the inaugural White Mountain Double Century event have their names and times listed below. The 9 riders that DNS, and 17 riders that DNF have not been listed, but we would like to thank them for their contributions and efforts, and look forward to seeing them complete the White Mountain Double Century next year.

The White Mountain Double Century Ride Crew members provided incredible support for the event. A very big Thank You goes to an outstanding group of volunteers who truly made it all happen!  From the feedback received we already have plans for improvements to  make next years ride even better for the riders and volunteers.

Thank you very much for hosting this new event. The route is destined to be legendary.  The support was fantastic, some of the best I’ve ever experienced. The extra water stops with ice were life savers. The distance between each stop was very good. Those potatoes at lunch were fantastic, and the smoothies were heaven sent. In that heat, there’s no way I could have eaten anything solid. So refreshing. And each and every volunteer went out of their way to be encouraging, helpful and friendly.

The rest stops had all my favorites. Plenty of V8, Mountain Dew, swee/salty bars. The juice packs at stop 7 were great. Refreshing and a good source of calories without having to struggle with solid food.  For a ride of 11,300 feet of climbing (according to my VDO MC1.0) it was a very difficult ride. I think it should be categorized as extremely hard, not just hard. That first climb…wow. Congratulations on a great inaugural event. I will be back! -Jim Poppy

Thank you for sponsoring a truly horrifying, beautiful, gut-wrenching ride from HELL!!!!!!! This was undoubtedly one of the HARDEST rides I ever finished.  That climb up Shulman Grove was one of the absolute toughest climbs of my life.  I would rate it up right up there with the climbs on the Climb to Kaiser and Terrible Two. I can’t say enough about the volunteers: Very helpful, humorous, knowledgeable, and friendly.  The food selection was top-notch.  Just think, that White Mountain climb is the LAST one on the LAST day of the Everest Challenge.  EGAD!!!  Oh, by the way, thanks so much for escorting me in on the last leg.  I really appreciated that.  Thanks again.

Thanks again for letting me register late and understanding my computer issues. This was a great event and you and your staff get AAA 5 star ratings across the board! I can’t believe this was a first year event, everything was spot on and the route was, well un-matched!!! I love the Bishop area, the desert and I used to fish and camp in the Owens valley with my Dad in the 60’s – It has changed a lot, but the Whites and the Bristlecones are still there to see. Please let your staff know that they did a great job.

Next year I might just bring my regular bike and leave the Fixed gear AT HOME so I can enjoy the spectacular down hills!!!Thanks again and see you next year. – Michael Melville

Thanks for a great White Mountain Double. The organization and support was flawless. That, coupled with the unique and beautiful route, should assure the ride’s ongoing popularity and success.

2.   The abundant supply of Hammer products at all the support stops was a treat.  My main DC fuel is Perpetuem with an occasional PB sandwich or banana. When ride organizers don’t provide Perpetuem or Sustained Energy, I pack my own, which is a nuisance.

3.  Support stops were well placed. The water stops (with ice) at the 264/773 split and on the grade to Basalt were life-savers for those hot, dry sections of the route.

4.   Ample seats at the support stops. There was always a comfortable seat waiting for me.

5.   Plenty of SAG.  I didn’t have any problems, but was comfortable knowing there were lots of SAG vehicles patrolling the course.

6.   Support staff was cheerful, enthusiastic, friendly and helpful – a wonderful group of people.

See you next year! -Bob Snyder

Thanks for putting on a fine event.  The rest and water stops were well spaced and supplied.  The smoothies at the turn-around were terrific! Really, really good and a wonderful idea.  There were lots of great, helpful volunteers and SAG cars.  The volunteers consistently went out of their way to be helpful.  At the next to last rest stop, 4-5 miles from the end of the last big climb, I saw a can of Ensure, asked the volunteer if that was for staff  use or to be distributed, and she answered that it was for staff but if it would help me finish she would give it to me.  I gratefully accepted.-Gerd M. Rosenblatt

Thanks. You guys and gals were great.  Really looking forward to next year.  Was very impressed with support and help we were given when we needed it.  Thanks.  -Jim Kelly

Thanks again for a great ride. I really appreciate that you allowed me to do the worker’s ride. I can’t wait to do the ride with the full group next year. -Joshua Talley

This was a tough ride for sure, even for the volunteers, but it was a BLAST.  I really enjoyed working both the smoothie rest stop and providing SAG support and following the last rider in.  It gave me a real sense of accomplishment, and I didn’t even ride that day!

Thanks for putting together a tough one.  We are hoping to return next year.-Molly Greene

1. THANKS – I think you and your volunteers pulled off a fabulous inaugural ride, the support was outstanding, certainly on par with organizations that are more experienced and consistently recognized for their efforts (Quackcyclists, DBC, and TT crew)

2. This double has the potential to turn into a serious disaster if the weather does not cooperate.  I remember DMD in 2007 (I rode, my wife and son volunteered) when a heat wave decimated the field – around 50 riders dropped out at lunch (the junction on Mines Road, about 30 miles from Livermore) and the Quacks had their hands full trying to get people back to civilization.  This year the WMD was pretty toasty, but it could get much worse.  There’s also to possibility of snow or high wind, like the FC 508 this year (where some pretty darn good riders were crawling at 9 mph into the wind while some were walking their bikes).  You’ve probably thought about this already, I’m just mentioning from a rider’s perspective that some of these conditions would wreck havoc in the peloton.

3. Smoothies are great in hot weather – that’s the best food I’ve ever had on a double, it would be awesome to not have these only at a single stop, but all stops that could be really hot (Boonies, Basalt).  On the flip side i think soup would be more of a cold weather thing.  The peaches were also awesome, it would be heaven to have these at Benton.

4. That cartridge on top of White Mountain was a great gift and very much appreciated.  I’d recommend giving out the threaded ones, since quite a few riders who don’t carry pumps, but do carry small threaded inflators. 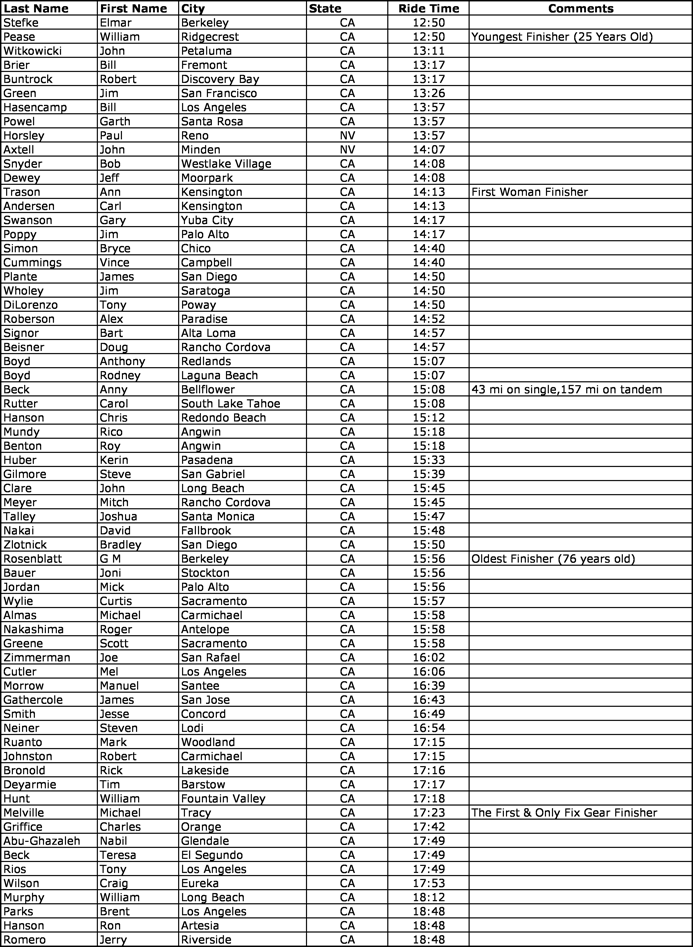 Recorded Times for the