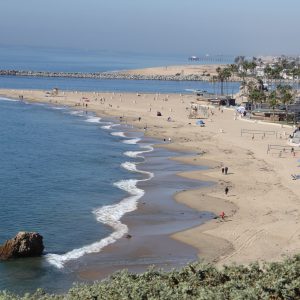 The 5th Annual Beach City Double / Century / Metric on September 10, 2022 is excited to have the ride’s start/finish at the Courtyard/Marriott in the great City of Irvine.  So come out to enjoy a fun day on your bike, riding to the beautiful vista points along the Orange County beaches. Choose any route you want, the Double, Century, or Metric Century all routes visit the Queen Mary in Long Beach.  The Century and Metric riders will get to ride over 80% of their ride with their Double Century riding friends with the way the routes overlap.

The routes include a variety of the below cities and highlights, except for the Double and it includes all of them:

The following items are included in your registration:

Look forward to seeing you there!!

The Beach City event starts and finishes at the Courtyard/Marriott in Irvine, The City of Irvine offers a system of bicycle lanes and trails to encourage the use of bikes as a means of transportation. It has 44.5 miles of off-road bicycle trails and 282 miles of on-road bicycle lanes.  The City of Irvine is one of the most bicycle-friendly and safest communities in America.

Reservations must be made no later than August 19, 2021 in order to receive the discounted room rate. Any reservations or changes made past the cutoff date cannot be guaranteed but will be accepted based on availability.

NdZONE’s Special Overnight Parking is $10.00 per night for hotel guest.

The Rules/Policies section to design clearly state NdZONE’s position on the rider safety and on business practices for the participants. We treat everyone equal, and therefore there are no exceptions to the rules and policies for anyone.  NdZONE is committed to creating enjoyable events. Thank you for your interest in the Beach City Double / Century / Metric.

Rules
Riders that break rules will be disqualified and prohibited from entering future events and lose their California Triple Crown credit.

The Beach City Double Century was inspired and made possible by Chuck Bramwell.  It is well tested and proven since it is mainly based on the “Long Beach Century”, the “Olympic Road Race Century”, and the “Oceanside Century” which Chuck has been leading in Orange County for many years with the Orange County Wheelmen as training rides for the Double Centuries.

Special NdZONE Recognition;  Jim Cook wrote: “A special thank you to Chuck Bramwell and Hugh Murphy for all their contributions.  Their energy, ideas, and suggestions have been significant forming the new Beach City Double Century. I have been so fortunate to have their help.”

The Beach City Double route goes through Santigo Canyon, Live Oak Canyon, Florence Joyner Olympiad Park, Laguna Canyon, Laguna Beach, Inspiration Point, Newport Beach, Huntington Beach (Surf City, USA), Seal Beach, Long Beach, and turns around at the Queen Mary, then back to Newport Bay and through the Back Bay to Irvine for lunch. After lunch then the route goes through Mission Viejo to Wagon Wheel Canyon, San Juna Capistrano, Capo Beach, down to a beautiful ocean view park in San Clemente, and then back to Irvine via Dana Point, Laguna Niguel, Aliso Viejo, and Lake Forest.

The Beach City Double Century is a fully supported ride with aid stations every 25-30 miles, roving SAGs, and it has a 19-hour time limit.  The time limit is soft if more time is needed it will be provided within reason and safety limits.  The route is an estimated 186 miles with 7,000 feet of climbing.

We will have seven fully stocked and placed aid stations.  We will have some Hammer product, snacks, and fruits.

All RWGPS have updated.  Check back on September 8th for Route Slip updates.

The Double Century route has been broken into 3 separate RidewithGPS files to help avoid any navigation issues.

The Century route goes across Irvine and joins the Double Century route at the Florence Joyner Olympaid Park and onto the beautiful vista points in Laguna Beach, Inspiration Point, Newport Beach, Huntington Beach (Surf City, USA), Seal Beach, Long Beach, Queen Mary and back to Newport Beach, then goes through the bay back to Irvine.

The Century route has been broken into 2 separate RidewithGPS files to help avoid any navigation issues.

The Metric Century route has been broken into 2 separate RidewithGPS files to help avoid any navigation issues.